Styrofoam container bans an opportunity for this Hawaii company 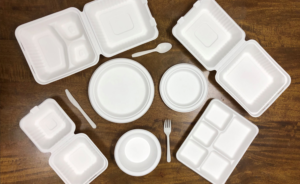 Pearls may come from oysters, but opportunity can come from a clamshell, especially when it’s a polystyrene clamshell being banned for use in Hawaii. On Thursday, Ilio Products launched a new B2B division of its Malama Eco Products line, gearing up for demand it’s anticipating as restaurants and institutions comply with new bans on polystyrene, or styrofoam, food containers and utensils.

Maui County’s ban went into effect on January 1st, a similar ban on the Big Island goes into effect July 1 and Ilio CEO David Pang expects to see the Hawaii State Legislature take up the issue as a statewide matter this session with more potential bans coming.

Ilio Products began in 2007 distributing pet supplies, such as puppy pads and treats. Pang tells PBN he added the Malama Eco Products line in 2012, intending to offer consumers an eco-friendly alternative for disposable food containers and utensils. “We focused on the price point first,” he said, “before we pushed the eco-friendly aspect, because that all things being equal, if people knew they could buy something that was better for the aina at the same price, they would.”

The products have been in such stores statewide as Don Quijote, Wal-Mart, Times Supermarket, Foodland, Safeway, Walgreens, Tamura’s, Waianae Store, Nanakuli Superette, KTA on the Big Island, VIP on Maui, Big Save on Kauai and Friendly Market on Molokai.

To prepare for the additional B2B division, Malama Eco added a warehouse staffer and a driver and one full-time and one commissioned account executive. No physical build-out was necessary. “We have enough room in the warehouse for the inventory we’re bringing in to get ready,” said Pang.

Clamshells and trays are made of sugarcane pulp, utensils are cornstarch-based, all sourced from various manufacturers throughout Asia. “Whoever can make it to our specs,” said Pang. “I handle the R&D, so it has to be able to stand up to beef stew, chili and rice!”

Restaurants will be able to order such things as 8-inch clamshells, luau trays, and utensils in quantities from 200 to 1,500 pieces.